← The Abuse of Prescription Drugs Can Lead to Death by Overdose
DRUG ADDICTION IN AMERICA: Facts and Figures →

We are well aware that a number of celebrities such as singing legend Elvis Presley, comedian John Belushi and football athlete “high tower” Bubba Smith died premature deaths from drugs. When these and other icons such as the “king of pop” Michael Jackson, model Anna Nicole Smith, and actor Heath Ledger each died from drug overdose, millions of people from around the world read the story in their local newspapers and national magazines, heard the tragic news on their radios, and watched the events unfold on television. 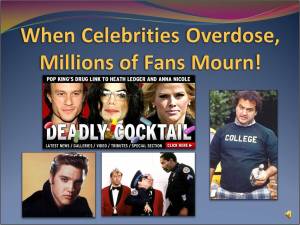 In spite of their popularity, fortune, fame and worldly success – their lives were cut short by drug overdose.  But tragically, many of their fans and admirers did not heed the wake-up call!

We Are Losing the War on Drugs

The United States has spent over 1 trillion dollars since President Richard Nixon declared the “War on Drugs” four decades ago.

Although arrest rates have increased by 1000% in the last 20 years, 1 out of 10 Americans are still using illegal drugs.

More and More People Are Dying from Drug Overdose

In the United States alone, Drug overdose rates have more than tripled since 1990! People are not only dying from illegal drugs but are overdosing on prescription medications at an alarming rate.

The Addiction Epidemic is not limited to the Western Nations. There are literally billions of people around the world addicted to drugs including cannabis, amphetamines, the opiates and cocaine.

The Physical, Emotional and Mental Devastation of Addiction

How Can We Make a Difference?

What can we do to turn the tide? How can any individual make a difference?

First of all, we must recognize who or what we are fighting:

Drug abuse is not just a physical addiction or a biological or chemical problem – it is a spiritual stronghold.  Pharmakeia is a word found three times in the Greek manuscripts of the New Testament. It is the root word from which we get our English word pharmacy or pharmacist. Pharmakeia is translated as witchcraft or sorcery. It speaks of the occult magical arts which are often found in connection with idolatry. Drug and alcohol abuse like witchcraft, are powerful, demonic strongholds.

Secondly, we must know how the battle is fought:

The weapons we fight with are not the weapons of the world. On the contrary, they have divine power to demolish strongholds. 2 Corinthians 10:4

To break the bondage and tear down the strongholds of addiction, we need to pray for the addicted so that they will come to the end of themselves and seek God.

The weekend of April 6 – April 7, 2013 has been designated as the 23rd Annual “Just Pray NO!” to drugs Worldwide Weekend of Prayer and Fasting. Since April 7th, 1991 “Just Pray NO!” has united millions of Christians from around the world in intercessory prayer on behalf of the addicted and their families.

To learn how you or your Bible study group or church can participate in our annual prayer event click here: “Just Pray NO! Prayer Weekend

Please take 5 minutes to view this important video and then share this link with your friends.

Biblical Insights into Combating Addiction, Teachings on Prayer and Fasting, links to Christian resources for the addicted: Find Help and Healing Scriptures

← The Abuse of Prescription Drugs Can Lead to Death by Overdose
DRUG ADDICTION IN AMERICA: Facts and Figures →